Volkswagen is Europe’s largest auto maker by sales as reported in late October 2018.  Tougher emissions regulations have been enforced in Europe, yet the company still made headway in the fiscal year.  The company reaffirmed its profit and sales outlook for the year, driving company shares 5% higher in early trading.  Volkswagen said net profit rose to 2.67 billion from 990 million in the same period a year ago.

The trade dispute between China and the United States has dampened business and consumer confidence, and brought a significant market decline in the third quarter, according to Volkswagen’s finance chief.  He stated that sales were also hit by the new emissions testing standard in Europe.

The company still managed to increase sales in China during the first 9 months of the year, partially due to a rise in auto financing and lower taxes on purchases.  Overall, Volkswagen sales for 4.1% world-wide to 7.6 million vehicles.  The Volkswagen brand, the company’s largest business by revenue and sales, increased revenue in the first nine months of the year, but pretax earnings fell 7% to 2.3 billion.

Audi, Volkswagen’s luxury brand and one of its main profit drivers, also posted a 7% decline in pretax earnings to 3.6 billion. Profit at Porsche, Volkswagen’s sports car brand, rose nearly 11% to 3.2 billion, while Bentley, the super luxury brand, continued to decrease, reporting a 137 million loss in the first nine months of the year.

Volkswagen confirmed its 2018 guidance, forecasting sales to rise as much as 5% and operating return on sales between 6.5% and 7.5%.

With ever-changing consumer tastes and uncertain trade tariffs, and increasing vehicle assembly levels, the time might be right to establish contract assembly operations in the United States. Automotive history shows that in the 1980’s, Cars & Concepts as well as American Specialty Cars provided niche convertible conversions of mass production vehicles.  Some say this could be due to the contrast in the assembly business model. The economics and labor dynamics – at least for the convertibles – drove the production back to the main assembly plants.

Many have reacted to Volkswagen’s announcement to end the production of the VW Beetle and Ford’s announcement not to import the Focus Active from China into the United States.

In the grand scheme of a 17-million-unit sales market, some would make an argument that at a dealership- and manufacturer-level, the ability to offer a niche-volume product, in the case of the Beetle, or flexibility to import product from global assembly operations, with the Ford Focus Active, matters. Niche vehicles such as the Beetle drive brand loyalty with unique styles for first-time buyers before moving into exile. For those families having the luxury to own more than that one practical vehicle in the garage, a halo vehicle offers a fun vehicle to drive and be seen in. Both situations drive dealer showroom traffic.

Ford dealers lost an entry-level vehicle to tariffs. There will be other options on the new vehicle side with aggressive financing packages or on the used vehicle side – that will offer utility at an affordable price. However, it will be one less option for the consumer and for Ford to balance out its global manufacturing operations by exporting vehicles from one region to another.

Considering these two examples, there might be an emerging case for contract assembly in North America, as Magna Steyr – as an example – offers in Europe and Asia. Unique body styles and price points have stayed in a manufacturers’ product portfolio. Also, with the U.S. – Mexico – Canada Agreement incentivizing greater powertrain localization, there might be a case for localizing the production of a small volume nameplate in a contract assembler that would use that last incremental engine or transmission output needed to justify building a North American engine or transmission plant module.

With the U.S. market becoming more fractionalized in vehicle nameplate sales and with greater uncertainty over the ability to import and export vehicles and components between regions, the time may be right to re-test the business case for contract vehicle assembly.

Ferrari debuted two new models at the Paris Motor Show, one of which does not have a windshield.  The models are both modern with carbon fiber skin and the fastest V-12 engine Ferrari has ever offered.  One of which is capable of hitting 125 miles an hour in under 8 seconds.  The two models are part of a new operation the Italian automakers is launching, and it will focus on bringing back the classic design concepts found in the past.

It’s part of the new strategy Ferrari has launched since the company went public in 2015, adding a variety of new models to help boost demand. The cars will be exclusive, with plans to build only 499 models.  Ferrari will only sell these to their best customers and collectors, meaning it’s by invitation only.  The two models are almost identical, while one version only holds one passenger and the other may hold two.

The super-light and ultra-strong carbon fiber bodies replace the hand-rolled and hammered aluminum that was the norm among exotic automakers in the years after World War II. That reduces weight, improves performance, and improves safety. 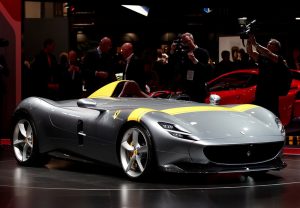 The models are unique in the fact that is neither have a windscreen.  Instead, the cars rely on a concept called “Virtual Wind Shield” which uses aerodynamic tricks to route air around occupants. Though modeled after classic race cars, Ferrari claims the SP1 and SP2 will be street legal. It remains uncertain if the cars, sans windshields, will be approved by U.S. regulators, however. They might require some modifications, or the use of helmets.

Speculation is that the vehicle will run between $2 million and $3 million dollars.

Mazda has announced a recall on almost 49,000 of its 2009 and 2019 Mazda6 Sedans due to a suspension component that may rust to the point that it breaks.  Broken parts results in drivers losing control of their vehicles.  Because this component is more likely to rust if it is exposed to ro 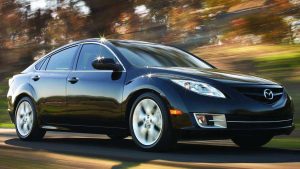 d salt,  the recall is limited to vehicles that were sold or registered in “salt states” where weather is typically colder.

There have been no crashes or injuries related to the issue according to the National Highway Traffic Safety Administration.  One way to tell if your vehicle is affected is to plug your car’s 17-digit vehicle identification number into the NHTSA’s website.

The problem: Mazda says it didn’t apply enough paint to a part of the vehicle’s suspension, so rust may occur if the car is exposed to road salt. A rusted component could break and the driver may lose control, which could lead to a crash.

The fix: Mazda says its dealers will inspect affected vehicles and either fix or replace the faulty component.

As of October 2018,  Chevy reports that Chevrolet Volt owners contributed to reducing the amount of gas consumers use.  In total, it was reported that 147,000 Chevrolet Volts in the U.S. have covered approximately 2.6 billion miles, and saved 108 gallons of gas. 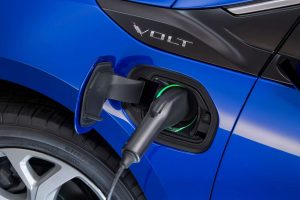 The Volt is equipped with one of the largest batteries available for cars today, which gives a range of about 53 miles.  Chevy has reported that the 2019 model year will increase this even more.

GM has also reported that the sales of the Chevrolet Volt have not specifically grown in the last few years.  The company is also approaching the federal tax credit limit, which will trigger a phase out of incentives- so the Volt will likely not expand in the market.

General Motors has announced that they are giving new-vehicle buyers the option to add two years onto their factory warranty.  The program is optional, and begins October 2018.  The warranty lengthens the factory 3-year/36,000 mile limited warranty on Chevrolet and GMC vehicles.  For Buick and Cadillac, the extension lengthens the warranty to 6 years/70,000 miles.

Pricing for the warranty will be left up to dealers.  GM suggests that they charge $1000-$2000 based on the price and type of vehicle.  The cost would be added to the vehicle price and rolled into their monthly payment.

“It keeps the GM customer experience pure, inside the GM system,” said Ken Mac, director of Chevrolet-Buick-GMC and Cadillac Protection. “We really believe the more pure you keep your GM experience, the better it is for you the consumer and the GM dealer.”

Several dealers reported having mixed feelings about the program.   They say that there is a risk associated that would help the manufacturer more than the stores.  However, some feel that the warranty is innovative and will help the dealer sell more cars as well as retain more service customers.

The recent administration says that tariffs on Chinese imports will shift manufacturing back to the United States, but some small to midsize factories are saying that the tariffs are hurting their business.  Many of these factories including automotive, rely on steel tubes cut in China for painting and welding.  One plant noted that they planned to hire another 40 workers, and because of the tariffs has decided to hold back.

The Trump administration says the tariffs are designed to counter what it sees as unfair trade practices that give Chinese firms the advantage over their U.S. counterparts. Some U.S. manufacturers have also reported an increase in revenues as it has forced customers to rethink supply chains.  However, other automotive companies have said that the U.S. tariffs are raising their costs and making them less competitive.

Some companies hit by tariffs aren’t only raising prices to offset the added costs, but some are delaying plans to expand within the U.S. while they search for other offshore production options.  One nonprofit that helps manufacturers make decisions about relocating production stated that “overall, manufacturing in the short-term, the U.S. is worse off because of the tariffs.”

Swapalease.com, the nation’s largest car lease marketplace, unveiled today new analysis of its marketplace trends that show a culture of automotive preferences that continues to be redefined by America’s enchantment of trucks and SUVs. The analysis shows interesting preference trends that have changed for auto leasing that may help the industry understand what consumers want in a lease.

During the second quarter of 2016, roughly 27.5% of Swapalease.com drivers listed their vehicle under the category of “luxury sports sedan”, while another 24.0% listed their vehicle as either a truck or an SUV. During the second quarter of 2018 these numbers essentially reversed, with 22.8% listing a luxury sports sedan and 27.2% listing a truck or an SUV as their current vehicle lease.

Historically, the majority of leases written were for foreign brands, and this trend seems to be growing over the last few years. Approximately 66.0% of drivers said they were currently driving a foreign brand for their lease in 2016, and this number increased slightly to 68.2% in 2018. What’s more, while 44.7% said they wanted their next vehicle lease to be with a different brand in 2016, this number increased to 49.9% in 2018.

“America continues to say they want to drive trucks and SUVs rather than smaller cars, and this is especially true in a lease environment,” said Scot Hall, Executive Vice President of Swapalease.com. “We still see very attractive and aggressive deals on smaller car leases, and we certainly don’t think these will go away any time soon, but it would be wise for dealers, OEMs and even lenders to take note of this trend to build lease offers around their trucks and SUVs to satisfy this growing demand further.”
About Swapalease.com:

Headquartered in Cincinnati, Ohio, Swapalease.com is the world’s largest automotive lease marketplace and the pioneer in facilitating lease transfers online. More specifically Swapalease.com matches individuals who want to get out of their lease with people who are looking for short-term lease agreements. Prospective buyers can search the listings for the exact vehicle they want, and then register for a nominal fee, allowing them to use Swapalease.com’s safe online system to contact the prospective seller and close the deal. For more information about Swapalease.com or how to exit your lease early, call 866-SWAPNOW or visit www.swapalease.com.

As the need to ‘save the planet’ becomes more important, car companies are turning toward... more»

The Demise of Diesel

According to a landmark new study, 3.3 million people are killed by air pollution every year –... more»