We’ve all seen the ups and downs of General Motors, but with an intensifying union strike and decline in sales, the future of GM remains a mystery.

Of the four brands owned by General Motors, sales continue to weaken for three of them. Sales for all GM brands plummeted 28 percent, with truck sales improving 5.9 percent according to the Automotive News Data Center. The company’s overall sales have decreased by 1.1 percent to 2.1 million through the month of September. 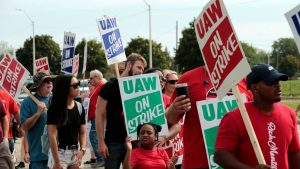 The Chevrolet, Cadillac, and GMC brands all had a drop in sales, while the sales for Buick models increased by 4.8 percent thanks to its Encore and Envision models.

According to Michelle Krebs, executive analyst for Autotrader, “The real story for the auto industry will be told in the coming weeks as Chevy and GMC dealers run low on pickup trucks to sell, with the UAW strike against General Motors leading the company to idle the plant in Mexico that makes the Silverado and Sierra, Dwindling inventory comes at a time of year when pickup truck sales are strong, and at a time when GM is in launch mode with its full array of new, full-size trucks. This will put the Chevrolet Silverado even further behind the popular Ram in sales. Most importantly, fewer pickup truck sales will impact Q3 and now Q4 profits at GM since pickup trucks account for the bulk of the income.”

In addition to the decline in overall sales for GM, their union strike has just entered its fourth week, and a union leader says that company negotiations have “taken a turn for the worse.” This union strike is bound to have a negative effect on the company and their financial standing.

According to CNN, General Motors announced that they will reduce their workforce by 15 percent including a quarter of the company executives. In addition, GM also announced that five of its production facilities will be shutting down. With GM’s major business overhaul, many workers are left looking for new jobs in the industry.

While GM is no stranger to hardships, it’s closing of 5 factories may indicate a grim future for the automotive company.