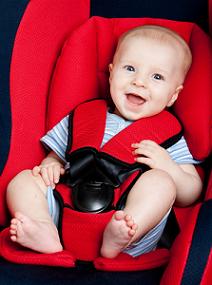 Properly securing your small children in car seats is the best way to protect them from possible injury in the case of an accident. However, child-safety seats can be notoriously difficult to properly install in the car.

Since 2002, new cars and new children’s seats have been required to come with a LATCH system to help with this problem. LATCH, which stands for Lower Anchors and Tethers for CHildren, equips safety seats with hooks and straps that can take over the role of the car’s seat belts. Cars are equipped with anchors in the back seats for the hooks to latch onto. Two lower anchors are located between the seat cushions, while the top tether latch is located somewhere behind the seat.

LATCH Differences
The one problem with the easy-to-use LATCH system, however, is that it is not always easy to use. According to a study by the Insurance Institute for Highway Safety (IIHS), only about 20 percent of new car models had LATCH systems that were considered easy to use. Though all of the models came equipped with LATCH, 80 percent of them presented unnecessary difficulties that often led to the children’s seats being installed incorrectly.

According to the IIHS, there are three things you should look for in a vehicle’s LATCH system if you have young children in car seats:

Popular models that received high ratings for their LATCH systems included the Cadillac Escalade, full-size Chevrolet SUVs and crew-cab pickups, and the Mercedes-Benz C- and E-series.

If you have children in car seats, you can find a vehicle equipped with an easy-to-use LATCH system at Swapalease.com. Please contact us if you have any questions.