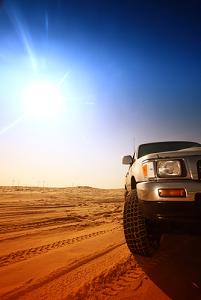 Among all of the different types of vehicles available today, the crossover and SUV tend to cause the most confusion. Though most people can easily identify vehicles in the crossover/SUV category by sight, differentiating which of those vehicles are “crossovers” and which ones are “SUVs” is much more difficult.

The Defining Difference
According to most people in the auto industry, the one thing which differentiates between a crossover and SUV is the platform it is based on.

Traditional SUVs are built upon truck platforms. This means that they have a steel frame supporting the vehicle body. The frame, wheels, suspension, engine and transmission on an SUV is nearly identical to that of a light-duty truck, to the point that they can both roll off the same assembly line.

Crossovers are a more recent invention. Instead of being based on truck platforms, crossovers are based on modern sedan platforms. This means that they do not have a separate frame. Instead, they utilize “unibody” construction, in which the frame is built into the body itself.

To complicate matters, though, some unibody crossovers are still widely referred to as SUVs. This is because their capabilities more closely mirror those of a traditional SUV.

Benefits and Disadvantages
Crossovers came about, and have grown in popularity, because their lighter unibody construction gives them the better fuel economy and handling characteristics of a sedan. They are basically sedans with more cargo capacity and higher ground clearance.

However, the lack of a truck frame, engine and transmission also means that crossovers do not have the towing capacity or rugged off-road capabilities of an SUV. If you want to tow a boat, haul feed out to a pasture or carry eight adults on a skiing trip, you will need a large SUV.

The choice between crossover and SUV, therefore, comes down to what you will be using it for and what characteristics you value.

Whether you prefer a crossover or an SUV, you can find the vehicle you want through an affordable lease transfer here at Swapalease.com. Please contact us if you have any questions.