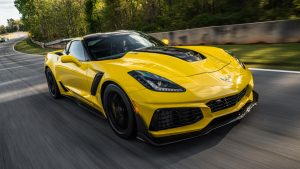 General Motors has announced it is recalling almost 500 Chevrolet Corvette ZR1s from the 2019 model year due to airbag deployment issues.

The company published a document stating that the sensing diagnostic model is “expose to extremely hard braking and sustained acceleration events under certain track conditions.  The SDM may enter a fault state and will not return to normal operation until battery power is removed from the system. In this faulted state, the SDM will not provide crash sensing or deploy airbags in the event of a crash.”

General Motors says the faulty operations can increase risk of injury in the event of a crash.  It is estimated that 1 percent of the 498 vehicles recalled could have the defect.

The issue with the 750-hp vehicle was discovered by GM engineers during a media demonstration at the Road Atlanta racetrack at the end of April. The engineers reported the issue on May 3rd, and an investigation was opened beginning May 8th.

GM tested the vehicle at its Milford Proving Ground and through a field data search found that the test revealed no related events.

The automaker’s Safety Field Action Decision Authority decided to conduct a recall as of May 24th.

General Motors says that customers can check their vehicle identification number against the NHTSA or Chevrolet recall websites to see whether their vehicle is involved or not. Dealers have been notified of the recall as of May 31st, and can reprogram the device immediately. Owners of faulty vehicles are to be notified beginning June 29th, 2018.