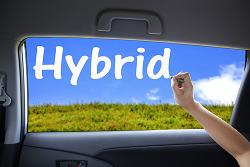 A “traditional” hybrid vehicle uses batteries and electric motors to improve the engine’s fuel efficiency. There are three primary ways in which a hybrid conserves fuel:

Hybrids and plug-in hybrids share most of the same features, including the technologies listed above. But there is one defining difference:

To make better use of this charging capability, most plug-in hybrid vehicles have more battery capacity and more powerful electric motors, so they can be driven in all-electric mode.

A plug-in hybrid operates as an electric vehicle until the battery charge is depleted, at which point the engine turns on. If your commute is shorter than the range of its batteries, though, the engine never turns on, and the car uses no gas at all. The MPG rating of a plug-in hybrid therefore depends heavily on how far you’re driving each day.

At Swapalease.com, you can find affordable lease transfers on a number of environmentally-friendly hybrids and plug-in hybrids. If you have any questions about how our convenient lease transfer program works, please contact us.